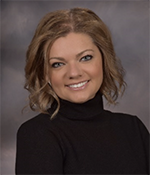 Aimee Andres, Executive Director of the Inland Rivers, Ports and Terminals (IRPT). IRPT is a trade association for the nation’s inland waterway, port and terminal professionals. She has extensive contact with the 300+ members of the Association in order to identify points of interest or concern and to optimize their benefits. Representing the interests of members in each river basin, Aimee encourages continued cooperation with local, state and federal authorities, as well as other waterway
associations to promote the value of the inland waterway system.

In August of 2019, Aimee became a successor in-line to her family’s-owned short line railroads, the Indiana Eastern Railroad and the Ohio South Central Railroad. Since being so named, Aimee has worked with rail crews on infrastructure improvement projects, state and regional funding programs, customer relations, and new business development, including marketing and project construction. She has strengthened terminal and railcar management, regulatory reporting, and policy enhancements.