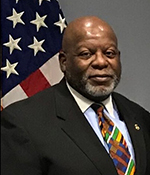 Mr. Baldwin has more than 38 years of federal service, serving as a Senior Executive in various high-level positions overseeing CBP operations domestically and worldwide. He has represented the United States on Customs related matters and training initiatives in Europe, Central and South America, and Africa. A strong supporter of leadership development, he served as an Executive Mentor for the U.S. Customs and Border Protection’s first Leadership Institute class in 2010 and again in 2011 at the University of Chicago.

Mr. Baldwin was awarded a certificate of completion for the Leadership in Crisis program from Harvard University, John F. Kennedy School of Government, Executive Education and completed the U.S. Customs and Border Protection Leadership Program at Columbia University Business School.