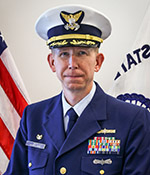 Throughout his career, CAPT Smith has held numerous field and staff assignments specializing in marine safety, security, and environmental compliance. Prior to reporting to Sector Houston Galveston, CAPT Smith was the Deputy Sector Commander of Sector / Air Station Corpus Christi. His previous assignments include Detachment Chief for the Liquefied Gas Carrier National Center of Expertise where he supervised a team of liquefied gas subject matter experts who provided technical advice and support to both the liquefied gas industry and the Coast Guard, Chief of Prevention at Sector Boston where he oversaw a 75 personnel department to ensure waterways safety and regulatory compliance of vessels and maritime facilities, Coast Guard Headquarters’ Directorate for Commercial Regulations and Standards where he worked as the US’s liaison to the International Maritime Organization (IMO), and field assignments at the Marine Inspection Office Europe, Rotterdam; Detached Duty Office North Bend, Oregon; Marine Safety Office Puget Sound, Washington; and Marine Safety Detachment Bangor, Maine. CAPT Smith received his active duty commission with the Coast Guard in 1996 after serving as an enlisted reservist for 3 years.

CAPT Smith is a 1996 graduate of Maine Maritime Academy with a B.S in Marine Transportation and a 2007 graduate of the University of Maryland’s A. James Clark School of Engineering with a M.S. in Systems Engineering and Reliability/Risk Engineering. CAPT Smith is a certified Project Management Professional (PMP) and Type 1 Incident Commander. CAPT Smith’s personal awards include four Coast Guard Meritorious Service Medals, four Coast Guard Commendation Medals, Military Outstanding Volunteer Service Medal, and other unit and team awards.

Originally from Pelham, New Hampshire CAPT Smith has lived in Houston since 2014 with his wife, Dr. Jennifer Smith and son Jack Smith.