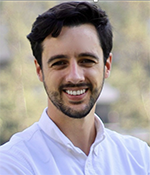 Carles Civit is Director of Engineering and Principal Investigator at Pliant Energy Systems, where he leads at team of engineers to develop fieldable undulating fin technologies. Blade-less devices capable of effectively interacting with fluids have direct applications in defense, marine propulsion, ocean exploration, and renewable energy.

Carles has over 10 years of experience in robotics for the medical, aerospace, and defense industries. His focus has been on transforming novel lab demonstrations into deployable and reliable robots, bridging the gap between basic research and industry needs.

Pliant Energy Systems has developed a novel engineering paradigm for harnessing the energy of flowing fluid, and for actuating on fluid with as little energy as possible. All the technologies emerging from this paradigm concern blade-less interactions with fluid. Pliant has an IP portfolio of eighteen patents, extensive know-how, and closely held trade secrets. Funding has streamed through Federal and State grants and Federal contracts. R&D has been executed through a program combining thousands of hours of numerical modeling with lab testing and prototype builds. The most notable build to date is Velox, the company’s agile swimming robot that can transition effortlessly from water to land, and travel over sand, snow and ice, funded in part by the United States Office of Naval Research.