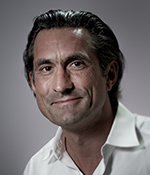 Mr. DeCoux has over 30 years of experience within the high-tech industries where his attention has been focused on Founding companies that enhance business productivity through automation. During that time he has raised over $100 million for venture and business operations.

Investment in a 21st-century Intelligent & Autonomous Infrastructure is among the highest priorities for stimulating economic expansion, job growth, national security and resilience. Edge computing, 5G wireless, Intelligent Transportation Systems (ITS), and an ultra-resilient electrical grid will drive the largest infrastructure buildout in our nation’s history.

Jeffrey DeCoux was the Founder and Chief Executive Officer of Hangar Technology, Inc. Hangar had a goal of achieving a $100 billion savings by 2025 by producing dramatic impacts on productivity and driving efficiency across some of the most demanding industries. Hangar worked with the leading ENR400 companies that focus on construction, infrastructure, telecommunications, and mega projects worldwide. Hangar developed the leading autopilot software used in 195 countries, by over 100,000 operators and executed one million missions worldwide.

In his prior experience, Mr. DeCoux was President and CEO of eCustomers, Inc. a leading provider of Enterprise Customer Response software. eCustomers raised over $30 million in financing and developed a leadership Board that included visionaries Allan Loren (Executive VP at American Express); Bobby Martin (CIO, President of Walmart International); Lou Hughes (President of GM International) and Gerald Storch (Vice Chairman of Target). eCustomers was acquired in 2002.

Mr. DeCoux was a Founder and President/CEO of SMART Technologies, a leading provider of Enterprise Relationship Management (ERM) software. Mr. DeCoux led SMART through its incredible growth to hundreds of employees; the recruitment of a strong management team and board including Jimmy Treybig (founder of Tandem), Andrew Heller (IBM Fellow) and Peter Solvik (CIO at Cisco). Investors included Goldman Sachs, SAP and Austin Ventures and worked with Fortune 100 corporations as customers. Mr. DeCoux assured the acquisition of SMART Technologies by i2, which amounted to over a billion-dollar acquisition.

Mr. DeCoux holds a deep knowledge of the technology industry and a lifelong passion for innovation. He enjoys working with young engineers that have a passion for new innovation or product advancement. He also has a passion for hands-on technology, embedded systems, robotics, and most of all – anything autonomous. He is active in his communities and serves as Director for his Community Association.