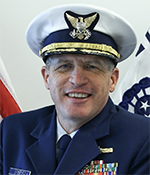 Captain Donohue serves as alternate: Captain of the Port, Officer-in-Charge of Marine Inspection, Federal Maritime Security Coordinator, Federal On-Scene Coordinator, and Search and Rescue Mission Coordinator. In this capacity, he coordinates maritime safety and security, environmental protection, search and rescue, waterways management, and contingency planning operations for the navigable waterways from Freeport, TX to Lake Charles, LA and 200 miles offshore to the seaward extent of the United States. This area of responsibility encompasses seven ports (including five of the nation’s twenty busiest ports, as well as the nation’s largest port) and accounts for 25% of the U.S. gross tonnage carried by ships.

His career in the Coast Guard has focused greatly on domestic and international marine safety, port security, incident management and environmental response throughout the world. He has: overseen deployments to major oil spills, hazardous material releases, natural disasters and exercises throughout the U.S.A., Southeast Asia and Pacific Oceania; assisted governments of the Caribbean and South America with the ratification and implementation of International Maritime Organization conventions; and worked with U.S. Embassies and foreign governments throughout Europe, Africa and the Middle East to facilitate application of the International Ship and Port Security Code. While serving at USCG Headquarters from, he also developed and oversaw implementation of the U.S. Mandatory Ballast Water Management Program and was a watch-stander at FEMA’s National Response Coordination Center for national-level contingencies and exercises. He is a certified Type 1 Incident Commander, ICS 300 Instructor, Facility Security Officer, and a Master Exercise Practitioner.