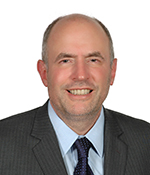 Mr. Mike Edgerton is the Manager of Port Security for the Port Authority of New York and New Jersey. Mike is responsible for the Port Authority’s seaport security program, including information and cyber security as well as compliance with the Maritime Transportation Security Act and the Customs-Trade Partnership Against Terrorism program.

Prior to joining the Port Authority, Mike worked in the private sector and has extensive experience with physical and cyber security in international port, maritime, and supply chain security, working on over 50 countries, including support to a number of commercial and governmental clients in the Middle East, Asia, Africa, Europe, Latin America and the Caribbean. Mike spent 9 years based in the Middle East as a Principal for a UAE-based security consultancy.

A retired military officer with service in both the U.S. Coast Guard and U.S. Navy, Mike has specialized in maritime and port security and intelligence for over 35 years. While assigned to U.S. Coast Guard Headquarters, he served as a Coast Guard representative on the Interagency Commission on Crime and Security in U.S. Seaports.

Mike is a Chartered Security Professional (CSyP), a board-certified security manager (CPP) through ASIS International, a Certified Information Security Manager (CISM) through ISACA, and a Fellow of the UK’s Security Institute. He is the author of the book, “A Practitioner’s Guide to Effective Maritime and Port Security”, published by Wiley and Sons and has two maritime security-related book chapters being published this year.

He holds a Bachelor of Arts in International Relations from Bucknell University, a Master of Science of Strategic Intelligence from the Defense Intelligence Agency’s National Intelligence University and is a graduate of the U.S. Naval War College.