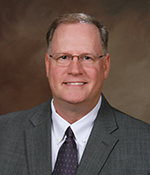 Chris Fisher is the Port Director and CEO of the Port of Beaumont. Fisher, 60, joined the Port of Beaumont in 1981. He was appointed to his current position on May 20, 2002. As Port Director, Fisher is responsible for the day-to-day operations of the port, currently the eighth largest in the nation in terms of tonnage and the top strategic port in the nation for handling military cargo. Fisher is also the Secretary-Treasurer of the Foreign Trade Zone of Southeast Texas, Inc.

Fisher began his career at the Port of Beaumont as a member of the port’s security/police team while attending Lamar University. During that time, he obtained advanced certification from the Texas Commission on Law Enforcement. Additionally, he’s worked at the port as Sales Representative, Manager of Administration, and Director of Finance and Administration.