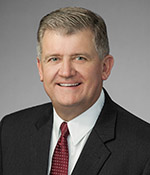 Roger Guenther was named the Executive Director of Port Houston in January 2014. With 34 years of experience at the port, Guenther brings operational leadership and a proven track record to the position. He oversees the efficient and effective operations of Port Houston’s public facilities, which handle a diverse range of imports and exports including container, general cargo, breakbulk, and bulk commodities and include the area’s largest breakbulk facility and two of the most efficient container terminals in the nation. Mr. Guenther is also responsible for advocating for ongoing improvements and maintenance of the Houston Ship Channel (HSC) in partnership with the U.S. Army Corps of Engineers. The HSC is the busiest federal waterway in the U.S. and ranked number one for waterborne tonnage. More than 200 public and private terminals conduct business alongside the HSC and together support $802 billion in annual economic value.

Prior to becoming Executive Director, he served as Deputy Executive Director of Operations and was responsible for all container and breakbulk cargo operations, management and construction of capital development projects, facility and asset maintenance, and real estate interests.

Since joining Port Houston in 1988, Mr. Guenther has served in various capacities related to facilities management, including master planning of the Bayport Container Terminal, redevelopment of the existing Barbours Cut Terminal, and procurement of all container handling cranes and equipment over the last three decades.

In 2016, Mr. Guenther was elected president of the Texas Ports Association and served through September of 2020. He currently serves on numerous boards and committees including the Texas Department of Transportation’s Texas Freight Advisory Committee, the Port Authority Advisory Committee, the Board of Visitors of Texas A&M University at Galveston, Texas A&M Transportation Institute (TTI) Advisory Council, the Port Terminal Railroad Association, the Greater Houston Port Bureau, and the Board of Directors of the National Association of Waterfront Employees. In 2021, he was appointed by Governor Gregg Abbott to the board of the Gulf Coast Protection District. Most recently, he was appointed to the Maritime Transportation System National Advisory Committee by Pete Buttigieg, Secretary of Transportation.

His awards and honors include: 2017 Bronze Award Recipient-Houston International Seafarers, 2018 Humanitarian Award (Philanthropic Male)-Latino Learning Center, and 2018 Most Admired CEO-Houston Business Journal. In 2022, he was inducted into the International Maritime Hall of Fame by the Maritime Association of the Port of New York and New Jersey (MAPONY/NJ).
Mr. Guenther earned a Bachelor of Science degree in Mechanical Engineering from Texas A&M University and has an MBA in International Trade and Finance from the University of St. Thomas.

A native of Baytown, Texas, he grew up close to the Houston Ship Channel and Port Houston. Mr. Guenther currently resides in Galveston along with his wife Fabiana, and has two children, Tyler and Emily.