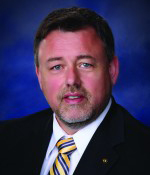 Geir-Eilif Kalhagen brings over three decades of direct experience in the Global Supply Chain, with an emphasis and core proficiencies in the Maritime sector, global logistics and international commerce.

This broad level of experience has been acquired during International deployment in S.E. Asia, Asia, North America, and Europe. Mr. Kalhagen global experience in the private sector along with his tenure as CEO and Executive Director in the Washington State Public Port system has led to recognition and appointments to National and International organizations. He has served as the First Vice President of the Americas for the International Association of Ports and Harbors. In addition serving on the strategic sub planning committee and the northwest caucus for the American Association of Port Authorities.

Kalhagen was equally recognized on the state level serving as Vice Chair for the Washington Public Ports Association. Washington Governor Jay Inslee also appointed Kalhagen to the Freight Mobility strategic investment Board. Mr. Kalhagen presently serves as the Director of the Maritime division for the Texas Department of Transportation

Geir-Eilif Kalhagen is recognized as an authoritative voice on the confluence of private maritime industry and public port management and has been a guest speaker on several topics for the American Association of Public Ports. Kalhagen has also contributed to discussions for Eastern Washington University MBA programs as well as guest speaking at the University of Oregon Executive MBA program. Mr. Kalhagen has partnered with Lamar University in the development of a Port- focused Master’s program

In addition he also earned a U.S.C.G. Limited Masters and a Six Sigma Black Belt.