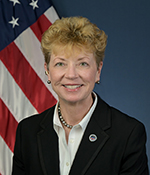 Rear Admiral Ann C. Phillips, US Navy (Ret.) was sworn in as the 20th Administrator for the Department of Transportation Maritime Administration on May 16, 2022. As head of the Maritime Administration, Phillips advises and assists the Secretary of Transportation on commercial maritime matters, to include the movement of goods, supply chain, as well as the U.S. maritime industry, environment and compliance, ports and waterways infrastructure, and strategic sealift. She engages public and private stakeholders in the maritime industry and oversees the U.S Merchant Marine Academy.

Phillips also oversees MARAD’s programs to improve and modernize the nation’s maritime network by administering the unprecedented investment in ports and waterways made possible by the Bipartisan Infrastructure Law, including $2.25 billion to be awarded over the next five years through the Port Infrastructure Development Program and $25 million for the America’s Marine Highway Program.

Prior to this appointment, Phillips served as the first Special Assistant to the Governor of Virginia for Coastal Adaptation and Protection, where she built a collaborative, whole of government and community approach to address the impact of coastal flooding across the Commonwealth, including the development of Virginia’s first Coastal Resilience Master Plan. In particular, she coordinated across Federal, State, local, and other partners to create equitable strategies to address rising waters and climate impact to federal, maritime, and other critical coastal infrastructure assets in Virginia.

Admiral Phillips served nearly 31 years as a surface warfare officer. Her final tour of duty, as Commander, Expeditionary Strike Group TWO, included the direct oversight of 14 ships and 10 subordinate commands – all the Amphibious Expeditionary Forces on the East Coast of the United States. Earlier, she served on the Chief of Naval Operations’ Staff as Deputy Director and then Director of the Surface Warfare Division. Previous to those positions, she had the honor to commission and command the USS MUSTIN (DDG 89) and to command Destroyer Squadron 28.

Phillips earned a Master of Business Administration, with distinction, from The College of William & Mary – Raymond A. Mason School of Business – in 2016. She holds a B.A. from the University of North Carolina at Chapel Hill.